112dB has announced the release of Mikron Cascade, an audio effect plugin that is designed to create organic cinematic atmospheres. 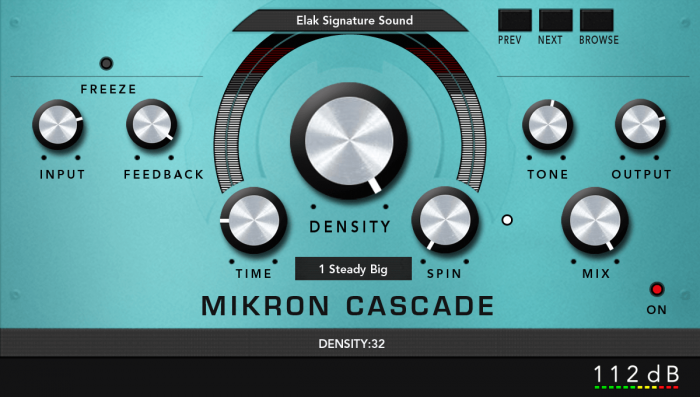 Mikron Cascade is the perfect tool to create atmospheric, ambient and drone soundscapes. It diffuses any sound input into a lively, lush, warm ‘sound cloud’. The fine-tuned delay models are specifically designed to create organic cinematic atmospheres. Mikron Cascade has been originally developed as a sound effect for the Cascade synthesizer. Thanks to its complex delay network a sound run through it can develop over time, adding extra dimensions to it. Which makes it the ideal plugin for those who are looking for a high quality ambient reverb, but one with far more complexity in it than usual.

Mikron Cascade was inspired by the work of Austrian composer Peter Ablinger. He experimented in the late 1980’s with sound densification using 12 tape decks. Sound was recorded and played, recorded and played, and so on, until colored static noise itself was the result. In 1993-94 Peter Ablinger’s concept of sound densification was refined by Peter Böhm, Wolfgang Musil (ELAK, University of Music and Performing Arts, Vienna) and Thomas Musil (IEM, Institute of Electronic Music and Acoustics, Graz). What was intended as a sound experiment, turned out to be able to deliver surprisingly warm, ambient sounds. This was the inspiration to create an effect based on the same principle, adapted to the requirements of the modern musician or producer.

Mikron Cascade for Windows and Mac (VST/AU/AAX) is available for the intro price of $29 USD until January 15th, 2018 (regular $39 USD). An unrestricted 60-day evaluation version is available for download.