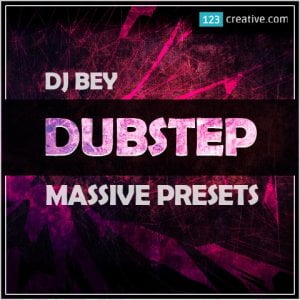 123Creative has announced the release of Dubstep Massive Presets, a soundset in cooperation with dubstep producer DJ Bey.

We are proud to present you new Dubstep presets for NI Massive synthesizer. The collection of 48 hard-hitting dubstep patches created in cooperation with DJ Bey, includes basses, growls, leads and synths. All 8 Macros have been assigned to each patch for maximum expressiveness and flexibility.

This set is influenced by artists such as: Must Die!, Barely Alive, Zomboy, Skrillex, EH! DE, Virtual Riot, Habstrakt and Bong.

The soundset is available for the introductory price of 12.44 EUR (regular 16.44 EUR). The patches are in NMSV format only.