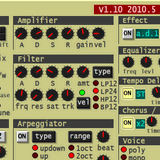 The version history for v1.10 shows some more improvements and fixes.

Synth1 is available to download as a freeware VST instrument plug-in for Windows PC.