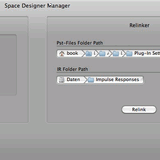 Space Designer Manager for Apple Logic Pro is available to purchase for the introductory price of 29 EUR until January 1, 2011.