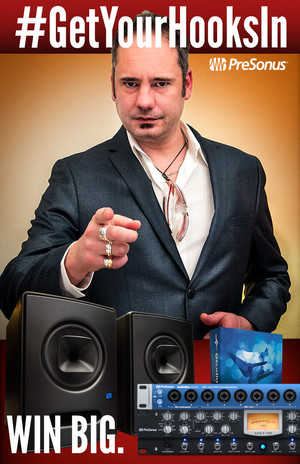 PreSonus and A-list producer/songwriter 5aint (clients include Amy Winehouse, Noel Gallagher, Sasha, and Pet Shop Boys) are co-hosting #GetYourHooksIn, a global vocal and songwriting competition to collaborate on the new 5aint single, which has the working title “Give2Get.” The prizes for this competition are quite exceptional.

Starting on March 12, 2014, 5aint and PreSonus will make available for download a stereo instrumental submix of “Give2Get,” embedded in a Studio One® file. The contest is not limited to existing users of Studio One, and a free version of Studio One will be made available to allow access to the track.

Contestants will write and record an original vocal line and melody, including lyrics for the song, and then will submit the resulting piece for judging. The contest closes at 11:59 p.m. U.S. Central Time on May 12, 2014.

A panel of special celebrity judges (including 5aint) will choose the winner and runners up. The panel will look for the submission with the most potential for widespread commercial appeal. The winning singer/songwriter, who can be an individual, group, or a production team, will be the featured on the recording and will receive 50 percent of the writing share.

In addition PreSonus will offer the following prizes:

5aint and Steve Dodds (Jill Jones [Chic, Prince], Martin Page, Alan Moulder), who performed guitar on “Give2Get,” will perform daily in the PreSonus booth at the 2014 Frankfurt Musikmesse trade show (Hall 5.1, Booth B.56), where they will discuss the production techniques used in the creation of “Give2Get.”