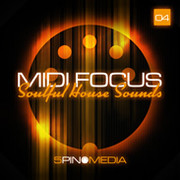 Soul was an important catalyst in the birth of House and it comes as no surprise that it remains as important today as it did back in the heady nineties, providing both inspiration and an organic flavour to the many genres of House. SOULFUL HOUSE SOUNDS has been designed to provide precisely this vital ingredient to any Deep, Soulful, Disco, Funky or Tech House production from East, West, North or South!

MIDI Focus – Soulful House Sounds is available to purchase from Loopmasters for £19.95 GBP.