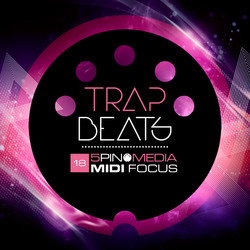 CAPSUN and 5Pin Media join forces with the mission to create the biggest and best Trap drum and MIDI pack available to date. Each sound has been uniquely designed, mixed and mastered to be ready to drop straight into your production. With over 200 MIDI drum patterns, over 160 drum and FX one shots, over 200 24bit WAV drum loops and 40 bonus audio loops, ‘MIDI Focus – Trap Beats’ will be your go-to pack for all your drum needs.

Brighton based CAPSUN is the creator of Bestselling and Top Rated sample pack ‘CAPSUN Presents Trap’ and knows the genre inside out. He is known as a producer, remixer, DJ and sound designer and has been pushing the exciting sound of Trap music in the UK. Having worked with artists such as Wretch 32, True Tiger, Kissy Sell Out, Slander, Scorcher, DrDr and more and with releases gaining BBC Radio1 airplay and acclaim across leading blogs, he is very much in demand.

Influenced by the monsters of the scene such as Flosstradamus, Luminox, Diplo, RL Grime, Bro Safari, Brillz, Ookay, Heroes x Villains and Huglife – this is not an outsider’s re-construction – This is the Real Trap Sound created by an industry professional and a fan of the genre.

The sound pack is available to purchase for £24.95 GBP.