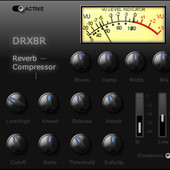 7AIR has announced the release of DRX8R, a freeware reverb/compressor effect plug-in for Windows.

A new and improved interface with reverb and compression, this new effect plugin is again designed primarily for drums, but can be used also for tracking any audio source.

Tested mainly in Windows 7 64bit, in my testing I used Soundforge to put it through its paces and it only used on average 1% of the cpu core. Tested in win7 64/32bit XP 32 bit.

DRX8R for Windows (VST) is available as a freeware effect plugin.