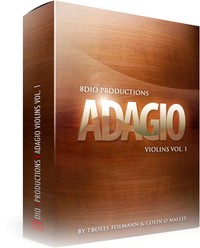 8Dio has announced the release of Adagio Violins Vol. 1.1, a sample library for Kontakt, containing over 33,300 polished samples and reprogramming of all articulations.

Produced by Academy Award, TEC and G.A.N.G Award Winning Composer, Troels Folmann and Emmy nominated composer and orchestrator, Colin O’Malley, 8Dio Adagio String Series marks the most expressive collection of deep-sampled emotional strings ever created. Adagio contains a variety of advanced techniques that were specifically developed for the library. The techniques allow you to create completely realistic string sequences with true emotion and passion. You don’t need to be a master orchestrator to sound great.

Adagio Violins is available to purchase for $499 USD. The update is free for all current owners.

8DIO Bundle #8 is a bundle specifically designed for students. You will get one the most extensively sampled pianos, the newest modern musical sound designs, song writing guitars and deep-phrase sampled studio solo violin at 40% off!

The normal price for this collection of deep sampled voice collection is $746, however this bundle has a special price of: $449

The Back To School Bundle is available until September 7th, 2012.