8Dio has announced the release of Qanun, a deep-sampled Qanun instrument for Native Instruments Kontakt. 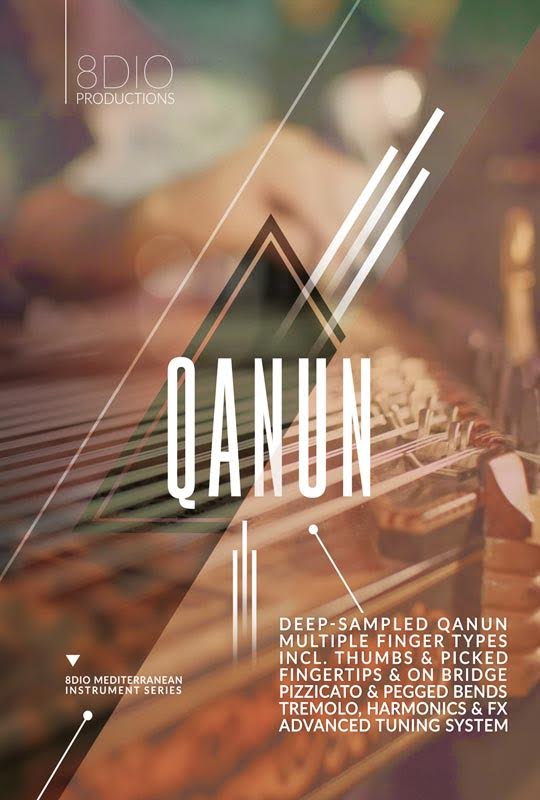 The Qanun (Kanun) is a plucked string instrument. It is a type of large Zither/Psaltery with trapezoidal soundboard and common in traditional Middle Eastern, North African and West Asian music. It is regarded as a classical instrument in most of the Arab world and Turkey (kanun). The history of the Qanun is somewhat sparse, but earliest versions of the instrument go back to 10th Century Egypt. The modern versions are using Nylon or PVC strings stretched over a single bridge poised on fish-skins and with attached tuning pegs (all elements that we sampled separately).

We deep-sampled the Qanun with a variety of different finger positions, which each has a different attack and percussive quality to them, including thumbs, fingertips, picks, picks on bridge and pizzicato style of playing. We also recorded all the pegged bends both ascending and descending in half- and whole notes, which is an unusual but cool technique for the instrument. In addition we recorded tremolo, vibrato made by moving pegs fast, harmonics, fisme on press, fiske on release and an assortment of sound FX.

The Qanun was recorded with four microphone positions, including contact mics, close mics, semi-close and room mics. The end-result is a staggering +23.000 samples and the most comprehensive Qanun ever sampled. We also added our new micro-tuner, so you can get traditional middle-eastern tunings for Qanun.