9 Soundware has announced the release of I/O, a downloadable kit of Channel Strip setting files and instructions in a PDF document for repurposing Apple Logic Pro as performance-oriented effects processors, using MIDI hardware.

The effects recipes are designed for use with an expression pedal, a sustain pedal, and the pitch wheel. Breaking the mold of conventional patch products, the included documentation guides the user through the necessary setup to configure uniquely interactive signal processors within Logic Pro. 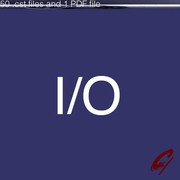 At the heart of the sound design behind I/O is atypical signal routing, glitches, and extreme settings. Consequently, the sound set features, among others, less prominent Apple plug-ins such as AURogerBeep, AUDistortion, Test Oscillator, SilverVerb, and AVerb. True to the 9 Soundware mantra “It’s not what you use, but how you use it.”, the kit was designed to be a cost-effective tool for adventurous music composition and performance using Logic.

The 17 controller assignments for 12 Logic Pro plug-ins highlighted in the documentation are designed to work in tandem, as a portion of the sound set involves simultaneous control across multiple plug-ins. While intended to be configured with “optional” devices, I/O is theoretically built around 3 types of controls – continuous (e.g., knobs), ”non latching” on/off (e.g., keys), and center detented (e.g., pitch wheel) – which are commonly found in MIDI keyboard controllers, and therefore one can be used in substitution.

The sound set is composed of 8 categories: “Pitch Shifter”, “Wah-wah Pedal”, “Envelope Follower”, “Downsampling”, “Delay”, “Reverb”, “Fuzz”, and “Signal Generator”. Each category consists of 5 recipes, with the exception of “Pitch Shifter” and “Wah-wah Pedal”, both of which comprise of 10, for a total of 50 Channel Strip settings and corresponding controller assignments.