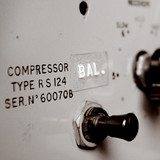 The RS124 plug-in was modeled using the original hardware and circuit diagrams with extensive listening tests taking place at Abbey Road under the guidance of Abbey Road’s Director of Engineering, Peter Cobbin. The RS124 is also one the worlds first dedicated Dynamics LCR plug-in, allowing users to ‘stack’ all three units on top of one another – as if you were in the studio! (TDM and RTAS only).

In addition to the functionality found on the original units, users can enjoy a new surprise feature. This extra function is wonderfully brutal and guaranteed to make your drums jump out of the speakers!

The RS124 Compressor Plug-in is available to purchase for PC and Mac (VST/AU/RTAS/TDM), priced at $560 USD (TDM) and $335 USD (Native). A free 10-day trial version can also be downloaded. An iLok USB key is required.