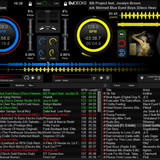 Adion has released version 0.98 of djDecks, a computer mixing program for both beginning and professional DJ’s.

djDecks is available to purchase for Windows PC, priced at 112 EUR. A demo version with all features of the full version is available for download from the djDecks website (stops working after 30 minutes of use).