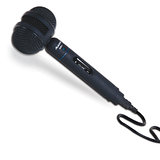 Alesis has announced the AM3, a stereo USB condenser microphone that enables users to record stereo audio directly onto their computers.

The AM3 makes computer connection simple, requiring nothing more than a standard USB port on your Mac or PC. Because it has a stereo, analog-to-digital conversion system built inside its housing, there’s no need for a preamplifier. And because the AM3 has a mini-USB jack output, there’s no need for complicated interface boxes or timecode alignment between the two sides. One cable is all you need for this digital solution.

The AM3 will be available from musical instrument and professional audio retailers in April 2009.