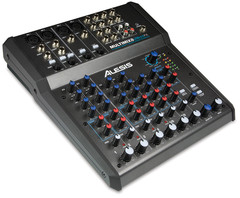 Users can employ the MultiMix 8 USB 2.0 FX’s four XLR inputs with independent gain pots on channels one through four and switchable phantom power supply for condenser microphones. They can also use the MultiMix 8 USB 2.0 FX’s eight 1/4-inch inputs for instruments, and pairs of RCA jacks for line-level audio sources. Guitar players will enjoy a guitar-direct input, enabling them to plug their instruments directly into the mixer for amp-free recording.

The MultiMix 8 USB 2.0 FX will be available from musical instrument and professional audio retailers in Q3 2011.