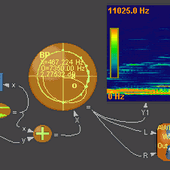 Andyware has announced that Analog Box 2 is now available as open source software.

Analog Box is an open-source, circuit based, modular software synthesizer. You put sound objects on the screen, connect them together, listen and adjust. When you find something you like, you can record it to a wav file, or just save the circuit and play it again later.

ABox is somewhat like the vintage synth’s of the ’70’s in that there are separate modules with lots of patch cords, knobs, buttons and displays. But you also get the computational ability offered by modern CPU’s. Features like FFTs, Differentials and Digital Control open up realms of sound design never dreamt of before. With the advanced capabilities offered by VSTi, USB/HID, MIDI and Directshow you could conceivably play your favorite video soundtrack through a plugin adjusted by a glove controller.

Analog Box 2 is available under the GNU GPL v3 license.