Antelope Audio has announced Goliath HD, its new flagship interface that is able to serve as the powerhouse centerpiece of any studio. 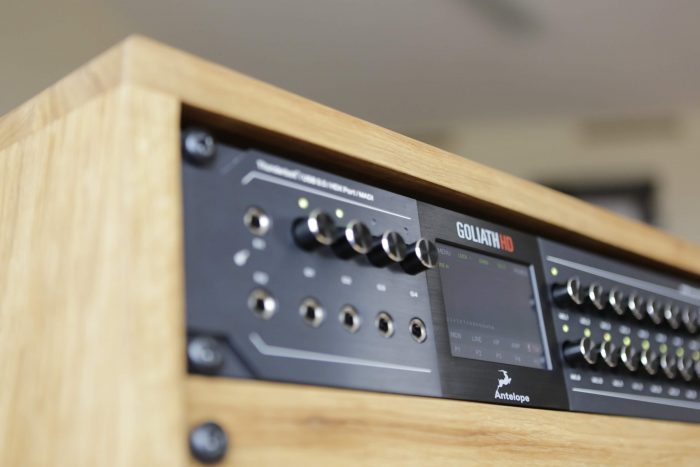 “With the launch of Goliath HD, even the most sophisticated studios can access the market leading features and innovations that only Antelope Audio interfaces can provide,” says Igor Levin, CEO of Antelope Audio. “Goliath HD — which works seamlessly in Pro Tools environments — is an uncompromising studio tool that improves overall sound quality while vastly expanding overall functionality.”

“No other interface on the market is able to serve as such a powerful and flexible centerpiece for the modern recording studio,” he continued. ‘The Goliath HD is a ‘must have’ for both advanced users and prolific recording studios around the world.”

Other-worldly Sound
Beyond the wealth of features that make it more versatile than any other interface on the market, the Goliath HD also sounds unlike any other interface on the market. For one thing, it sports the lowest total harmonic distortion (THD) available in a multi-channel interface across all 64 of its channels of input and output. Powered by the most advanced ESS chips available and Antelope’s legendary 64-bit Acoustically Focused Clocking (AFC) jitter-management technology and unique noise-lowering techniques, it also sets a new standard in digital conversion clarity.

One Interface to Rule Them All
The Goliath’s flexible digital connectivity allows it to interface with both Mac or PC in a snap via Thunderbolt or USB 3.0. It also boasts dual MADI connections, which are compatible with MADI to Dante Bridge products — allowing users to access all audio streams from anywhere within their Dante-enabled facility. Users can even have an HD and a Native DAW simultaneously interfacing with the Goliath.

The High Art of I/O
The Goliath HD pushes the envelope in the world of input and output, offering a staggering 64 channels of I/O in its modest two-rack space frame. These include 16 of Antelope Audio’s new Accusonic mic preamplifiers, each with individual volume controls, to make multitrack recording a snap with or without any additional outboard gear. Goliath HD’s 32 analog inputs offer an impressive 124db of dynamic range, with its 32 analog outputs going up to 129db of dynamic range. Combine that with mastering grade monitor outputs featuring new technology that boosts dynamic range to a spectacular 132db, and you have access to a new level of detail in your mixes, never before possible in digital recording.

In addition to offering sufficient analog connectivity through its preamps and DB25 connectors, the Goliath HD also offers several useful specialized inputs and outputs that eliminate the need for excess gear around the studio. These include four guitar DI inputs, two transformer-based re-amp outs, a built-in talkback mic, two headphone outs, and a pair of analog inserts.

Goliath HD also has a range of connections availability for clock signal distribution: users can synchronize any gear in their system via the Goliath’s AES, MADI, ADAT, S/PDIF, and BNC connectors for use as Loop Sync or standard Word Clock. For the ultimate audio experience, Goliath includes an atomic input for Antelope Audio’s industry-leading 10M and 10MX atomic clocks.

Goliath HD desktop application also delivers comprehensive mixing and routing capabilities, enabling full control of input and output routing as well as submixes and FX processing. Thanks to Antelope’s new Session Presets functionality, all of these details — including specific FGPA FX settings and HDX compensation settings — are instantaneously recallable and sharable. This helps make the Goliath HD a perfect complement to Pro Tools HD based studios, particularly studios with multiple rooms or artists working in several locations. Users can simply dial in a particular session and access it any time or anywhere with a click of the mouse.

Touch the Power
Powerful apps for both IOS and Android allow Goliath HD users to adjust mic preamps and output volumes remotely as they move about their studio or venue. The Goliath HD’s front panel has also been enhanced with monitor and level indicators and a responsive touchscreen that provides easy access to preferences, while 16 convenient push-and-turn knobs allow for Mic Preamp selection and gain control for the Goliath’s built-in preamps.

The Goliath HD interface makes its debut at the Musikmesse convention, booth E28, hall 9.0, to take place in Frankfurt Germany between April 5th and 8th.

The Orchestra for Kontakt by Sonuscore announced