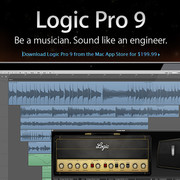 Apple has updated its Logic Pro music production software for Mac to version 1.9.6.