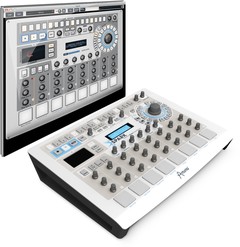 Arturia has announced it is shipping version 1.5 of its SPARK Creative Drum Machine, the latest update to its highly-creative hybrid hardware/software beat production centre.

Upon its June 2011 release, SPARK Creative Drum Machine revolutionised hands-on beat-making by cleverly combining analogue synthesis, physical modelling, and samples with the intuitive workflow of a hardware drum machine, as well as offering in-depth control over the sounds of the 30 classic analogue and digital drum machines it so successfully captured; now, with the introduction of Version 1.5, Arturia has taken the art of creative rhythm programming and performance to a whole new level with a dazzling array of new performance-orientated features and a truly heavyweight library totalling 118 kits/1,800 instruments!

Last, but by no means least, Version 1.5 sees SPARK Creative Drum Machine’s library considerably expanded to include no less than 28 new kits exploring the current span of electronic and urban music stylings — from euphoric EDM synths to almighty analogue dubstep kits, as well as the latest in alternative hip-hop, Arturia has teamed up with the world’s most in-demand sound designers to bring professional perfection to any production.

Thanks to Version 1.5, there has never been a better time than now to ignite your rhythmic creativity with SPARK Creative Drum Machine… beat the future!