Audanika has released version 1.4 of SoundPrism Pro, a touchscreen instrument and MIDI controller for iOS. 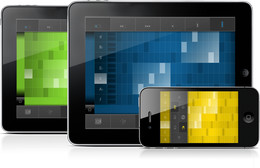 This new version of the app allows you to use your iOS device to control MIDI control channels (which can be assigned to synth parameters & FX) through movement. By assigning a MIDI control channel to the X & Y axis and using the devices accelerometer you can manipulate sound through movement like never before – and whilst still using SoundPrism’s Pro’s innovative touch interface to play multiple MIDI channels, as demonstrated in this video http://www.youtube.com/watch?v=8ToavJcbNCQ

The latest update also enables velocity, which opens up a new level of expression and realism to playing synths and VST instruments with SoundPrism Pro. Velocity sensitivity can also be set within the apps options, allowing the user to a good level of control over this feature.

SoundPrism Pro has already proven to be popular with the ever growing number of mobile music producers and performers and has already been used in work by Roger O’Donnell and Sleeping at Last, who have used the app to record their recent ‘Yearbook’ project. The app currently features in the top 100 music apps for iPad on the app store and is regularly recommended by Apple to their iOS users.