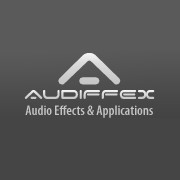 Audiffex has announced a permanent price reduction of its effect plugins for Windows and Mac.

Audiffex significantly reduces prices for majority of its products. The price reduction is a permanent discount, not a time-limited offer.