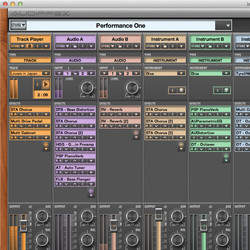 Audiffex has announced the release of inTone 2 for Mac, a powerful and flexible effect processor/ mixing console.

Entirely rewritten and redesigned audio application for live performances broadens ways of its utilization in the world of music. Its structure and control options resemble a mixing console, offering a large scale of extra features at the same time.

inTone 2 for Mac is available to purchase now at $7 for a strip. The PC version of inTone 2 is to be released in March, 2014.