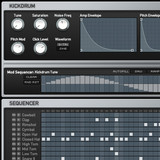 Audio Damage’s first instrument, Tattoo, is a drum synthesizer where everything old is new again. Featuring 12 independent “voice-tuned” synthesizer topologies loosely based on the X0X series, and an incredibly sophisticated step/mod sequencer, Tattoo is at home in all forms of electronic music production.

Tattoo will be available for PC and Mac (AU/VST) soon.