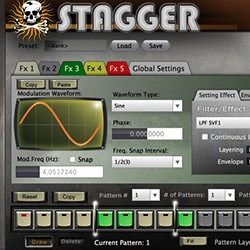 Audio Poison has released version 1.0.3 of Stagger, offering several bug fixes and optimizations to the multi-filter/multi-effect plug-in for Windows and Mac.

Stagger is a modulation, filter and effect sequencer full of filters and effects that is setup to be programmed in layers of steps.

Stagger for Windows and Mac is available to purchase for $80 USD.