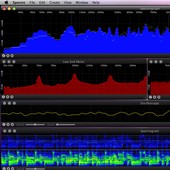 First-time users and existing fans alike have plenty to discover in the newest version of Spectre, the real-time multi-analyzer from Audioﬁle Engineering.

Developed exclusively for Mac OS X, Spectre 1.5 not only offers versatile and precise tools for examining live audio, but also makes those tools simpler and more approachable than ever before.

Spectre for Mac OS X is available to purchase for $99 USD. The Spectre Starter version is available for $49 USD.