Audiotechracy has announced a collection of free guitar patches for Propellerhead Reason. 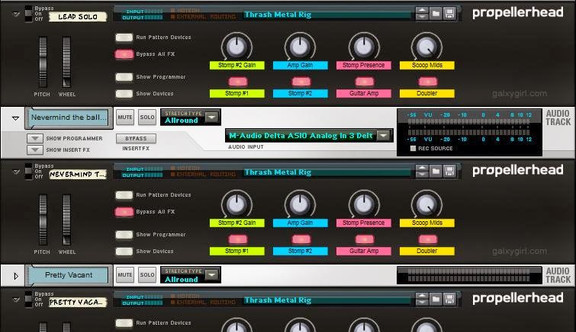 After the success of the ‘Rock and Metal Drums ReFill Vol.1’ that I released a while back I have decided to follow that up with a set of guitar patches for you all to try. Rather that releasing this in the form of a ReFill, this time the download is in the form of just a Reason file with the patches all lined up in it for you.

The reason for doing this is that some of the patches are wah devices and include the automation lanes for the wah effect within the file. Also, whilst all of the patches are based in a Reason audio track, some of them use audio tracks paired up with Propellerhead Combinator patches built on the Line6 guitar rig (I’ve used the ‘Thrash Metal Rig’ one, but toned it down a bit). I could have built all the effects into Combinator patches and then released that as just a single unit, but I wanted to make these patches as accessible as possible to everyone. So no loading up patches or connecting things up to different audio channels then having to automate the wah yourself.

With these patches you just plug your guitar in, select the patch you want and off you go. If you want to then use these in Reason projects rather than just for practicing with then you can copy and paste them over to your tracks in the usual way.