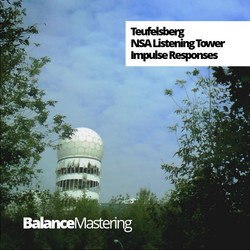 Balance Mastering has announced the relesae of Teufelsberg NSA Listening Tower Impulse Responses, a free set of reverb impulse responses allowing you to use the acoustics of the main listening tower at the former NSA compound, Teufelsberg, in your own productions.

Prior to the fall of the Berlin wall the compound was run by the American and British military with the main objective being to intercept and process any Soviet and Eastern Bloc communications as part of the ECHELON intelligence gathering network. You can find some excellent historical information in the links below, including a micro-documentary made by Vice in 2010.

We’ve recorded the impulse responses with great care and mastered them to be useful in a wide variety of situations. There are six (quite different) variations to experiment with and apply to your source audio. Finding an opportunity to approach the towers and record the impulses was tough, not to mention having to climb and squeeze through a tiny gap to reach the uppermost tower, so we hope you enjoy incorporating a piece of Cold War history into your music and audio productions.

The pack is available to download in 24bit 96kHz WAV format. Additional sample rates and bit depths are available in an advanced pack.

M-Audio announces updates to Virtual Instruments included with its products