BBE Sound and Plugivery have announced a major update to the Sonic Sweet audio plugins bundle that brings BBE Sound’s legendary tone to your productions. 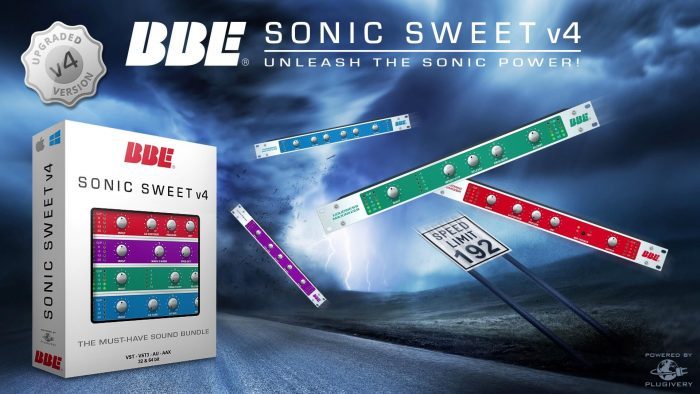 Version 4.0 has been built from the ground up within a new framework that brings the classic sound of BBE Sound into the future.

When Audio Professionals talk about their “must-have” Equaliser, Neve usually is the first brand mentioned. Ask about their choice of a compressor and it might be an Urei 1176. When the subject is an enhancer/maximizer, “BBE Sound” is usually the answer. Throughout the world, there’s barely a studio, sound engineer or record producer that doesn’t own at least ONE version of BBE’s enhancer/maximizer tools.

BBE Sound products have been used on countless productions to give them more sparkle in the high end and a richer fatter sound in the low end without being “muddy”. BBE products have been copied over and over again but people stick to the BBE Sound trademark because they are quite simply the best sound tools in their category.

The BBE Sonic Sweet v4 plug-ins gives you exactly the same brightness, clarity, and fullness as the hardware modules with the added bonus of being fully automatizable.

The Sonic Sweet v4 bundle has been completely rewritten using a new framework, “Powered by Plugivery” conserving every nuance of the same great tone as well as the ease of use you’d come to expect from BBE Sound products.

The Sonic Sweet v4 bundle is available as a FREE update for all previous v3 owners.

Throughout December, The Sonic Sweet v4 bundle will be available at the introductory price of $99 USD (List $249 USD).