BeatSkillz has announced RetroHit, a virtual instrument featuring the drum sounds from the 80’s.

RetroHit features over 600 vintage drum machine sounds from the E-mu SP-12, Oberheim OB-Mx, LinnDrum and Fairlight, tracked and recorded through a selection of tube and solid state preamps and compressors. 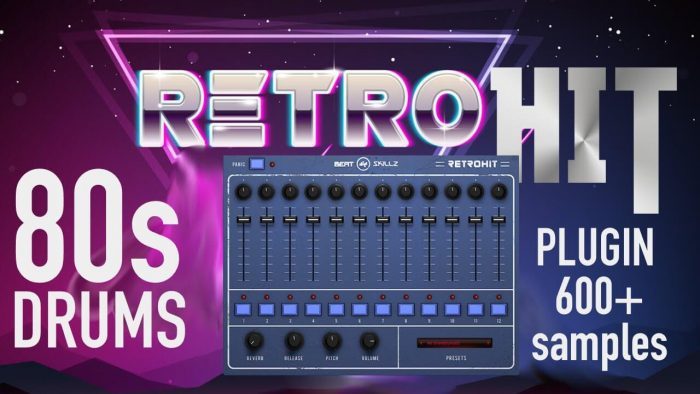 As the 80s sound is back and has been creeping up in modern chart topper tracks by major artists, as well as new soundtracks for tv series and film, we couldn’t hold back and had to release a drum plugin based on the hit sound of the 80s. Retro Hit is inspired from the pop/ dance and rock sound of popular bands and artists from the 1980s.

The plugin provides 50 Drum kits of Kicks, Snares, Hats, Cymbals, Claps, Toms, FX and Percussion which are available as processed versions already treated with eq, compression and reverb, and also some dry versions. We wanted to provide the processed sounds as well, so that the producer/ musician can be instantly inspired and can get to producing music, rather than tweaking the raw sounds from scratch. Dry untreated versions are also provided for those who want to tweak them on their own.

The Plugin provides drum kits of 12 sounds per patch. These as visible as buttons that light up when played on the GUI.

RetroHit for Windows and Mac (VST/AU, AAX coming soon) is available for the introductory price of $39 USD until October 2nd, 2016 (regular $59 USD).