BeatSkillz has announced the release of its new Synthwave Drums rompler instrument featuring the sounds of 80s drums.

The plugin comes with over 113 preset banks with 12 sounds each, for a total of over 1,356 one-shot drum sounds. 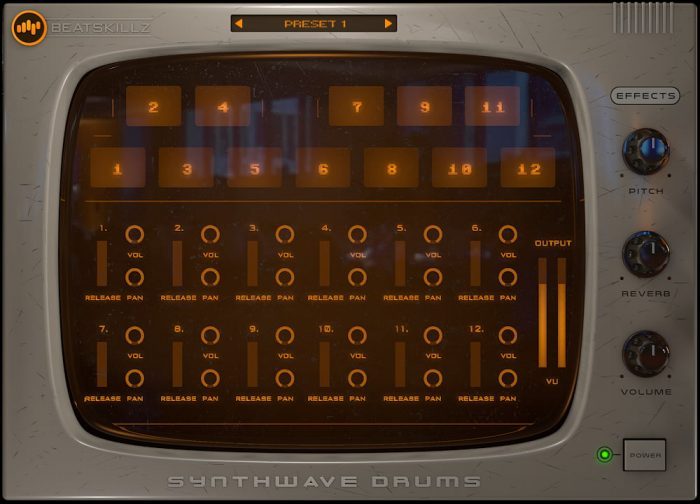 The 80s defined the era of Synthesizers and Drum Machines. This is the time when great musicians suddenly had electronic instruments at their disposal, and a new genre of music evolved. Certain drum machines defined and made the 80s sound instantly recognizable. These drum sounds came from early samplers and analog synthesis. Romplers/ Samplers were 8 and 12 bit and made any sample put into them sound “unique” and it did not sound like the original recording. Lower sample rates of 10-22khz and early D/A converters also played an important role in defining the Drum Machine Sound!

SYNTHWAVE Drums is a resurgence of the 80s drum sound in the 2010s and follows the principals of the retro production styles. Synth wave Drums not only brings you all the popular drum machine sounds, but also brings dry and processed versions that sound exactly like the records you’ve heard. This helps in solving the “processing mystery” behind these hit sounds. Often when you buy emulations or samples of just the drum machines, the sounds are too raw and sound nothing like the sounds of the genre.

Synthwave Drums for Windows and Mac (VST/AU) is available from Plugin Boutique for the intro price of $49 USD until July 10th, 2018 (regular $79 USD).