The “warmth” and “crunch” that certain great valve gear brought to classic recordings is still missed today. Although many companies have tried to emulate classic valve hardware, we felt that we still needed to reach out to our hardware outboard for “that sound!”

We were after that Classic British Distortion Valve Sound produced by the 5654 valve based equipment. Finally we decided to embark on the difficult journey of trying to emulate and get the sound signature of one of our favorite pieces of valve gear. In order to do this we needed to start from scratch. So we went a little back in time, much like the gear, and found a unique mathematical system to model our classic hardware, including all its detailed non-linearities. This modeling technology was then further designed and implemented by our team to measure how different transients “react” to valve gear. 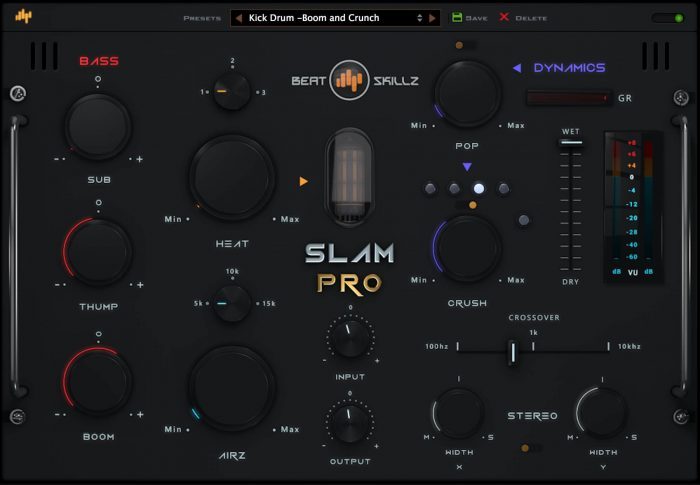 Slam Pro is a Mix Phattener Processor with control over the Bass Section, Presence and Air, Compression, Saturation, Stereo Width and Loudness of your track. All these sections of this amazing plugin come with selections for different “Flavours”.

All musicans and producers have different taste and different genres of tracks that they create, hence we created the ultimate channel strip with 3 knobs for controlling the Sub Bass, Thump & Low Boom of the channel or mix, there are 3 Flavours of Heat (Saturation), 3 types of AIRZ or High Frequency & presence control, 4 types of POP Compression suitable to the entire mix and drums/instruments/synths & sampler sounds. Crush Limiter and Loudness maximizer.

Both plugins are available for Windows and Mac (VST/AU/AAX) from Plugin Boutique.