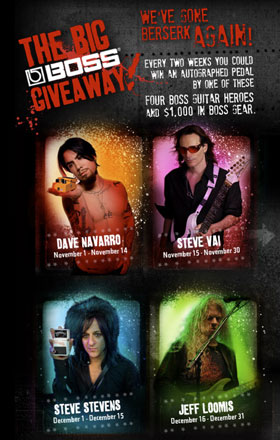 BOSS has announced the return of the Big BOSS Giveaway.

BOSS has gone berserk again with another round of The Big BOSS Giveaway. The biweekly contest gives tone freaks everywhere a chance to win BOSS pedals autographed by top guitar heroes and $1,000 in BOSS gear.

To enter, contestants should visit the BOSS Facebook Giveaway tab and fill out the entry form.

Every two weeks between November 1 and December 31, 2011, a different signed BOSS pedal from a famous guitar hero will be given away, as well as $1,000 in BOSS gear. Contestants can enter once every two-week period, giving them up to four chances to win.

Note: Contest eligibility is for U.S. residents only.

Audentity Records Halloween Sale: Get 40% off on sample packs!