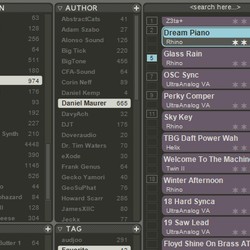 Big Tick has released version 1.7 of its Zen universal presets manager for Windows and Mac.

Most popular vstis are supported, and new ones are added daily. Eventually Zen aims to categorize all available presets, for all vstis.

Zen for Windows and Mac (VST/AU) is available to download at no cost.