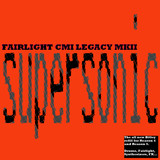 Quite a number of patches. Fairlight CMI Legacy MKII contains over 1,000 single NNXT patches. Over 450 Combinator patches. Over 150 ReDrum drum kits. A number of brand new signature patches from ThinkingMachine and Abstract Assasinator, two of Sweden’s best Reason programmers, in addition to a wide range of new patches from Patrick Fridh Aka Bitley, Reason user since the year 2000 and previously known for building factory patches for Propellerhead and Clavia as well as commercial ReFills for PowerFX.

Fairlight CMI Legacy MKII ReFill for Reason 4 and higher is available to purchase for $149 USD. A free update ReFill will be posted later this year, with patches using Kong and Octorex and new rex files to take full advantage of the Reason 5 features.