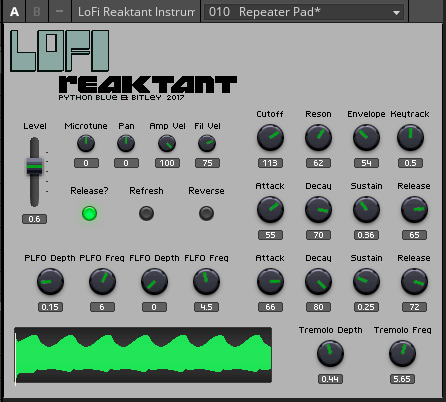 Lo-Fi Reaktant is a lo-fi sample playback engine effectively rendering what could be called desirable degradation on the sound quality, in a similar way as the first digital samplers; the Publison, the Emulator and the Fairlight.

Turn the filter up on low octaves and a modern sampler in all its perfectness won’t produce much changes to the sound. Lo-Fi Reaktant will. A whole world of scattering and significantly aliasing noises will turn up. Towa Tei’s world!

We have bundled Lo-Fi Reaktant with a bunch of interesting samples for you to begin experimenting. Almost regardless of the parameter settings made on these, what you will discover is the real sampler sound of yesterday. Not only have we bundled some very sought after classic sounds; when played back with this plugin the sounds ooze with true oldskool character.

Lo-Fi Reaktant for Reaktor 6 is available for the introductory price of $19 USD.