Bitwig has announced the release of a beta of Bitwig Studio 4.1, an update to the music production software for Windows, Mac and Linux.

70 new factory presets showcase some of what can be achievable with each of them. 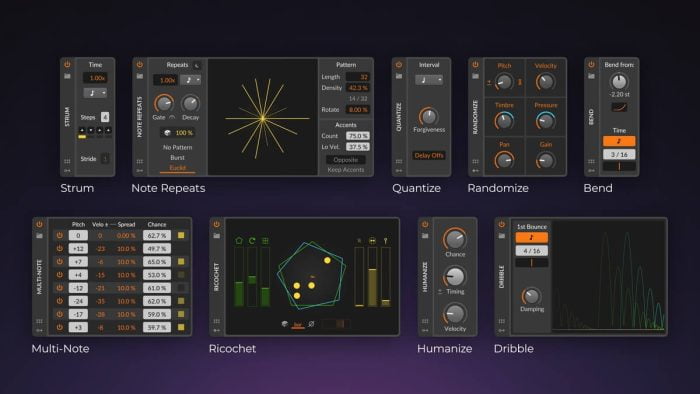 Notes help us make music, triggering our sounds both on the timeline and in performance. But what if notes did more? As signals that dance and curve, notes can truly be a creative force in Bitwig Studio. Operators gave new behavior and animation to sequenced notes, and with Version 4.1, eight new note effects are bringing a wealth of performance-ready possibilities. So with 20+ processors now included, we say… Let There Be Notes!

While each note effect device has a focus of its own, some themes emerge. Many add randomization to each note that passes through. A couple of these musical tools make notes more similar, and others diversify them. Most of these devices put notes into motion, including three different kinds of “note repeats.” And this is all before you try two effects together, or add Bitwig’s modulators to the mix.

The Bitwig Studio 4.1 beta is available for download today. Anyone with an active Bitwig Studio upgrade plan can download the installer from their account. The official release is planned for this year. The new Bend, Humanize, Quantize, and Randomize devices will be available in Bitwig Studio 16-Track.