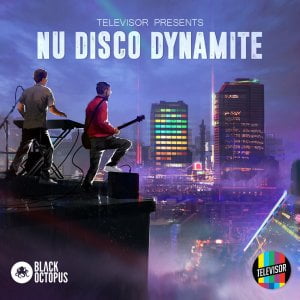 Televisor’s passion for music runs deep, and it definitely shines through in this one of a kind sample pack. The expertly produced sounds contain a large assortment of arps and leads, funky guitar riffs, live played bass samples, outrageously funky synth bass, drum one shots, organic disco drum loops, fx, keys & piano, music loop, stabs, and much more! The samples in this pack serve as the perfect sound palette for producers looking to explore that Nu Disco/Indie Dance/French House sound.

The musicloops serve as creative building blocks for kick starting your tracks. Use the loops by themselves or throw them into your favorite slicer to from new patterns and bring them to new life. The large assortment of one shots compliment the loops very well and will appeal to both beginners and advanced producers. Some bonus MIDI files have also been included for extra versatility.

Overall this pack is chalked full of sounds that are guaranteed to provide you with the inspiration you have been looking for. Do not miss out on this absolute gem of a sample pack!

The sample pack is available for purchase for £31.95 GBP.

Ibiza Weekender for Spire and Sylenth by Mainroom Warehouse