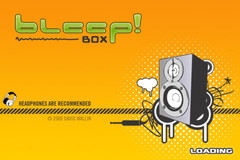 bleep!BOX, the premier analog style drum and synth sequencer for iOS, has been updated to version 1.3.1 which addresses a couple bugs.

bleep!BOX is available for both the iPhone and iPad as a universal binary, meaning you buy it once and own it on all your devices. bleep!BOX for iOS costs $9.99 USD.

bleep!BOX is also on it’s way to your desktop sequencer as a Mac / PC VST Plugin (pricing and release date TBA).