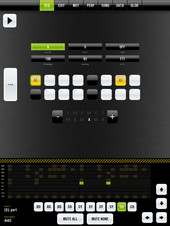 bleep!BOX, the analogue synth/drum machine for iPhone/iPad, is now available as a Windows and Mac VST plugin.

Bleep!BOX is now one of only a few apps that run across iOS, OS/X and Windows. Now you can make music wherever inspiration strikes you and then load it up in the studio later for additional effects or arrangement.

bleep!BOX VST features patch compatibility with iPhone and iPad versions enabling users to use sounds they’ve made on the phone or tablet in their sequencer of choice. It also features full parameter automation, and the option to directly sequence any of bleep!BOX’s sound parts, which will let people create even more complex arrangements.

bleep!BOX allows users to arrange synthesizer melodies, program drum beats and edit dozens of parameters in real time. Unlike other music apps, bleep!BOX does not limit users with fixed sample sets or pre-made loops. Instead it uses only tweakable, analog-style sounds.