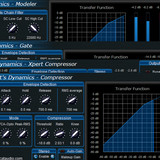 Blue Cat Audio has released updated versions of its Dynamics and Protector plug-ins.

The new versions bring RTAS format and 64-bit platforms support, as well as several enhancements and fixes such as improved Logic Pro support (check our side chain tutorial). You can read more details on the product pages.

The upgrade is free for existing customers, so don’t miss it!