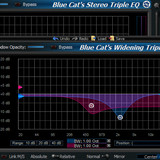 Blue Cat Audio has released updates for its EQ plug-ins.

All our EQ plugins are now available for Pro Tools and 64-bit platforms, check them out!

This update also brings bug fixes and improvements. The upgrade from the previous version is free for existing customers. It concerns the Liny EQ, Parametr’EQ and Triple EQ plug-in series