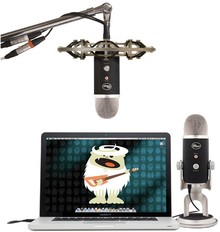 So whether you record at home, in a studio (or in the Himalayas!), the Yeti Pro is your ultimate sound solution.