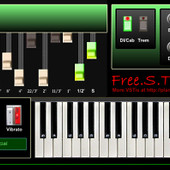 Bob Leggitt has released the GutterSnipe, a free organ instrument in the FreeST plug-in series.

The GutterSnipe is the fifth virtual organ in the FreeST range. It has a new tone engine and voicing, specifically geared towards rougher, heavier sounds. The new design includes analogue waveform stereotyping, an unusual ten-drawbar tone system, powerful overdrive, built-in reverb, and dynamic crushing for that ‘speaker cracking under the strain’ feel. A newly tailored version of the Real Rotor speaker simulator is also built in.

The GutterSnipe allows more aggressive sounds than previous FreeST organs, due to its guitar amp-style pre-gain structure. But before I get into that I need to mention the DI/Cab button, because it’s more than a simple Rotary on/off switch – it’s a complete mode change.

GutterSnipe for Windows (VST) is available as freeware.