Included in these new additions are several rare prototypes, including one of the few Moog Apollo Synthesizers in the world (the Apollo became the prototype for the Polymoog), the Moog Liberation, Moog Drum Controller, Moog Sequencer, Moog Song Producer, Moog Feedback Suppressor; as well as production models of the Minutemoog, and a Moog Vocoder. Also added to the archives are more than 1,000 schematic drawings dating from 1965 through 1985. 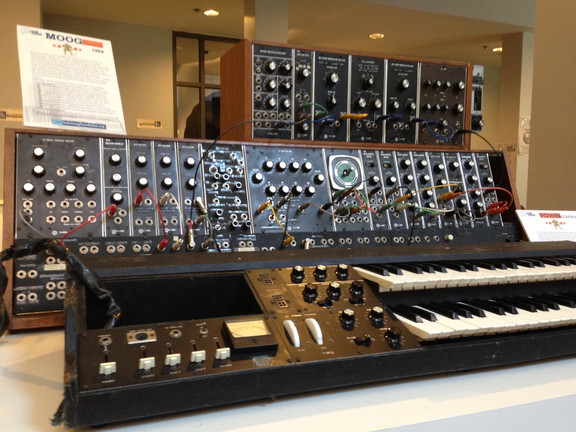 “These instruments and drawings join our growing collection of treasures that also includes Roger Powell’s custom keyboard controller, designed by Bob; a duophonic Minimoog; and two vintage theremins,” remarked Michelle Moog-Koussa, executive director of the Bob Moog Foundation and daughter of the late inventor. “We’re thrilled with the ongoing interest our archives are generating from organizations and individuals.”

These latest additions to the Foundation’s collection of historic documents and musical instruments come on the heels of the permanent loan of vintage instruments by the Music Department of University of North Carolina at Greensboro in December 2013.

According to Moog-Koussa, over 400 of the more than 1,000 documents received in this latest contribution have already been inventoried and entered into a searchable database.

“But that’s just the beginning,” she continues. “We will soon begin the most detailed and formalized part of the archiving process – cataloging. It takes time to do it right, but these materials are too significant not to do it right.” She anticipates the process will take 12 to 18 months, after which the documents will be scanned and the most significant of them shared.

“Creating a wide-ranging collection that includes not only his work, but also the work of those he influenced is the goal of the Bob Moog Foundation,” she adds. “It is from this perspective that we can achieve the truest picture of his life’s work and ultimately appreciate his contributions to science and music.”

As Moog-Koussa observes, her father was generous with his talent and knowledge. “Inspiring others fueled his own creativity. We endeavor to carry on that tradition at BFM.”

Moog-Koussa points to the work of Dr. Bob’s Sound School (DBSS) as an example of BMF’s ongoing outreach and education, an important part of her father’s legacy. The 10-week curriculum teaches second grade students the physics of sound using acoustic and electronic musical instruments such as the theremin, as well as oscilloscopes. The information is supplemented by custom educational materials developed by the BMF educational team. “Bob was a life-long learner,” his daughter explains. “He never stopped asking ‘what if’ and wanted others to ask the same question. I can’t think of a better tribute to his life and work than encouraging a new generation to ask the same question.”