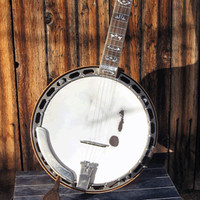 The Kontakt version uses a KSP string algorithm which allows the user to choose between playing in a specified position or to play on a particular string only. Also included in the Kontakt version is the ability to select articulations via velocity rather than the default key switches if desired.

On the EXS24 version, numerous banjo maps are offered which emphasize the span of a particular strings samples, as well as a separate components folder with each banjo string mapped to its full sampled length. Both the Kontakt and EXS libraries have an instrument created for use with a MIDI guitar controller.