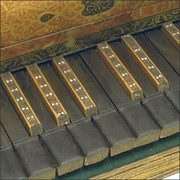 Bolder Sounds has released Virginal, a sample library created from a replica of a 4 octave Italian Box Virginal.

The Virginal is the predecessor of the Harpsichord with the strings running parallel to the keyboard rather than from front to back like the Harpsichord. England’s Virgin Queen ( Elizabeth I ) was said to be a fine performer on the instrument.

Virginal is available to purchase in Kontakt 3 and EXS24 formats for the introductory price of $29.95 USD until the end March 2011.