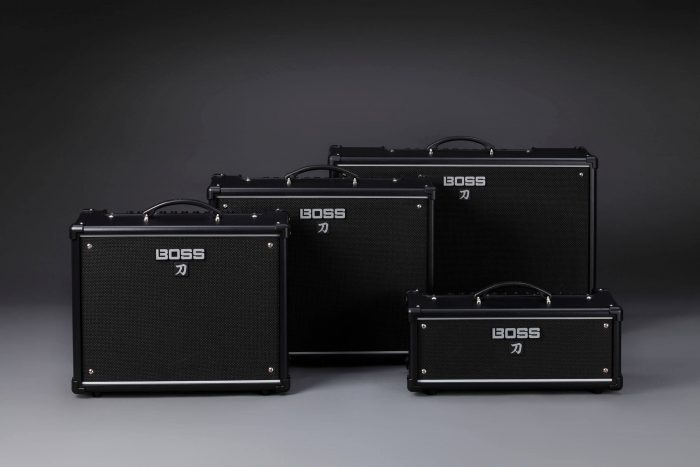 The stage-ready Katana amps have received worldwide acclaim for their winning mix of authentic tube tone and feel, versatile onboard effects, and exceptional value.

All Katana amps (with the exception of the Katana-Mini) include integrated access to a wide selection of BOSS effects, which are customizable using the free BOSS Tone Studio editor software. Version 2 adds SDE-3000 delay, Phaser 90E, and Flanger 117E effect types, bringing the total number of available effects to 58. The three new selections are based on effects used to create some of rock’s most famous guitar sounds and are a perfect match for the Katana’s high-gain Brown channel tones.

One of the Katana’s most powerful features is the ability to store favorite amp channel and effects setups in Tone Setting memories for instant recall. The Version 2 update adds a second bank of Tone Settings, doubling the number of available memories. Combined with the newly added channel and global parametric EQs, this elevates the Katana’s performance versatility to even higher levels. Users can switch between the two banks from a panel button or an optional external footswitch.

Version 2 also enhances the Katana’s Reverb section, allowing it to be used for delay or delay-plus-reverb in addition to reverb alone. And on Katana amp models that include an effects loop, the send/return capabilities have been expanded for greater flexibility when inserting external processing in the signal path. All of these features are easily configurable using the BOSS Tone Studio software.

A standout characteristic of every Katana amp is the dynamic interaction between its output section and the speaker, which provides a highly responsive tone and feel that players love. With the new Cabinet Resonance function derived from the flagship Waza amps, users can now shape this interaction with three selectable resonance types. Katana amps also offer line and USB outputs with speaker cabinet simulation, and Version 2 enhances this capability with three Air Feel settings inherited from the Waza series.

The Version 2 update is available as a free download and can be installed by connecting a compatible Katana amp to a computer via USB.