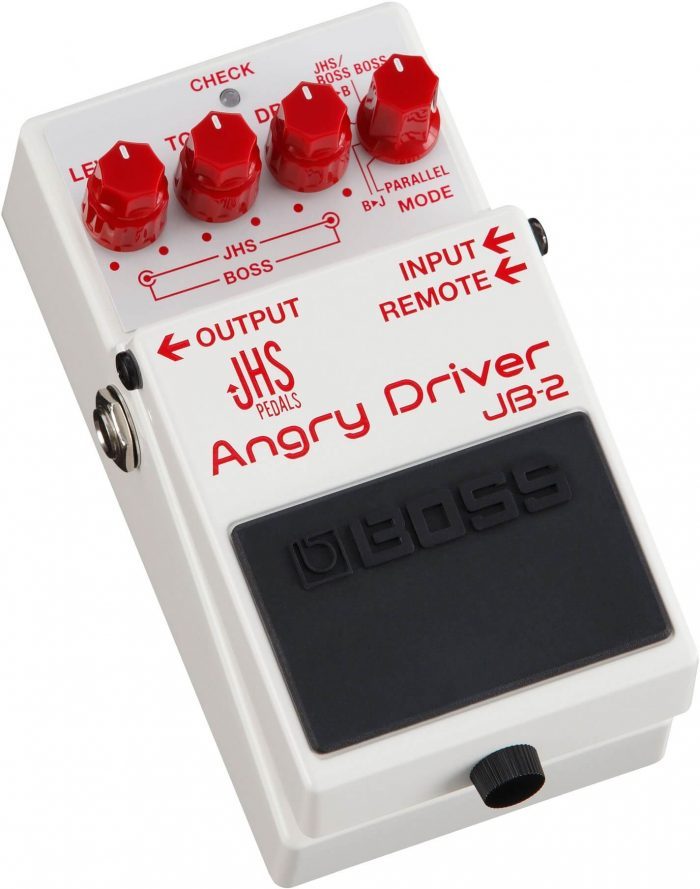 A six-way mode selector allows the player to choose between the two overdrive types or combine them in various series and parallel configurations. This enables the JB-2 to produce an enormous range of sounds, from subtle boost to ultra-high-gain distortion.

The idea to develop the JB-2 pedal was born of the friendship between BOSS President Yoshihiro Ikegami and JHS Pedals founder Josh Scott, and their shared passion for innovative pedal design. The Blues Driver has long been a favorite pedal for Josh, and he credits it for leading him into designing his own pedals and starting his own company. “I got into pedals because, as a player, I used two Blues Drivers together for years and years,” Josh relates. “Huge thanks to BOSS for that Blues Driver; that really sparked my curiosity and made me love pedals.”

BOSS and JHS Pedals felt that the Angry Charlie would be an ideal match with the Blues Driver in a single pedal design. “It stacks amazingly with the Blues Driver,” says Josh, “that pedal obviously being the low-gain side and carrying everything from boost to overdrive, and the Angry Charlie carrying that medium-high overdrive all the way to distortion.” Josh is very pleased with the way the JB-2 turned out, saying, “I am 150-percent satisfied. I love it.”

The JB-2 is equipped with three dual-concentric knobs that provide independent drive, tone, and level control for each overdrive type. Via the mode selector, the player can configure the pedal for BOSS or JHS operation, choose two different serial connections for stacking, or run the two overdrives in parallel. “In parallel, the six controls form one new pedal, and that is very, very cool,” says Josh. “When you put them together, they all interact, and there are hundreds of sounds.”

The JB-2 also includes a mode that allows the player to toggle between the two overdrive types with the built-in pedal switch. In addition, the pedal supports control of the various modes from an optional external footswitch.