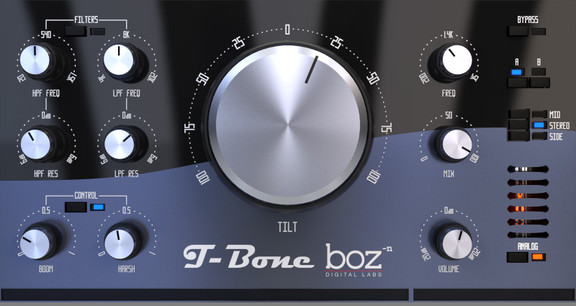 We also came up with this super hand feature called Boom and Harsh Control. Sometimes adding extreme amounts of tilt EQ can have some nasty side effects. If tilted too far to the left, you can end up with a lot of low end build up. Tilt too far to the right and you can get too much harsh high end. The Boom and Harsh Control lets you add massive amounts of tilt without getting harsh or boomy. It’s really an essential part of what makes this plugin so easy to use.

We also added mid/side mode and an analog mode that adds subtle distortion and compression to your sound. Enable that for some grit, or disable for super clean tone shaping.