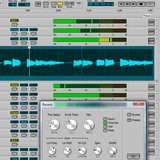 The new release also features a built in VSTi bridge, which runs the VSTi plug-in in a separate Windows process. This new feature allows for using all memory available in 64-bit Windows by running multiple 32-bit processes.

Version 6.1 is available free of charge for users who purchased MultitrackStudio after February 1, 2009. Older versions can be upgraded from Pro Plus for $39 USD, and from Professional for $23 USD.